In 2007, a mosquito bite ended up changing Connie’s life. She contracted the West Nile disease, which led to meningitis, and eventually, a diagnosis of epilepsy. For the first two years she struggled with seizure control, finding the right medication, and lifestyle changes.  After a round of tests, it was concluded that Connie did have seizure activity in her brain, but did not have epilepsy. She was taken off her medication and continued to work in the corporate world. She experienced sporadic seizures, but felt “under control for the most part,” until the stress level of her job increased dramatically when her case load doubled. 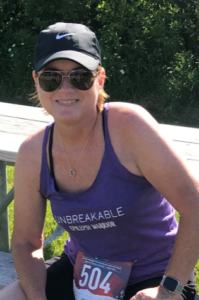 In 2018 Connie knew that “something wasn’t right,” and that she needed rest. Along with the stress level of her job, she was also going through menopause. One day she went to the market and didn’t know how to get home. After another round of tests, she was officially diagnosed with epilepsy in October of 2018, and was told by her doctors to “take it easy.”

The diagnosis was not easy for Connie. She was very sensitive to the medication she was put on and suffered from memory loss, fatigue, and muscle weakness—a big factor for Connie, as an avid runner.

“At that time, I felt lost, frustrated and broken in many places. My memory was failing me on many levels and my quality of life was diminishing.”

No longer working, Connie had to come to an understanding of the impact that epilepsy was having on her life. She tried calling the Epilepsy Foundation of Greater Chicago several times, but only to hang up. Eventually, she says she was “brave enough” to speak with an EFGC case manager and enrolled in HOBSCOTCH, an eight week program designed to help individuals with epilepsy impacted by memory loss, last December.

“I learned how to manage my life through the Epilepsy Foundation,” Connie says. Before HOBSCOTCH, she “was struggling each hour to remember to do things, basic daily things. Frustration, anxiety and new meds compounded my memory nightmare.”

Connie has completed the HOBSCOTCH program and now understands “the new road of life.” She knows that she has a “responsibility to be mindful.”

“I don’t let epilepsy define who I am,” Connie says. “When I was diagnosed, I felt like I had this monster inside of me, but I’m not going to let it ruin my life.

“Epilepsy is a fiber of who I am. It’s the invisible dance partner that I did not ask to dance with. He’s here, and he’s here to stay, but I can handle it.”

Connie has received a great deal of support from her family. She describes her husband Larry as “the kindest, most respectable person in my life.”

“He’s the kind of person who validates that you are at where you are at and that it’s OK.”

Connie’s four children (now ranging in age from mid 20s to mid 30s) are very supportive and understanding of the limitations epilepsy can bring to their mother’s life.

With the support Connie has received from the HOBSCOTCH program, as well as her family, she has decided to look for employment again. She also created her own support group, Purple Heart Support. It’s still in its beginning stages, but Connie is committed to helping others and her goal is simple.

“I want to break the isolation of epilepsy one friendship at a time,” Connie says. “I will always have a fire in my belly. Epilepsy might take me down, but I’ll get back up.”

This is evident by the fact that she never gave up on her passion – running. In 2019 she was running a 5K every other weekend and completed two indoor and one outdoor  triathlons.

The organizer of the HOBSCOTCH program, Stacy, sees the drive in Connie and is so happy with what she has accomplished.

“It has been such a joy working with Connie. She always says that I’ve changed her life, but she has changed mine. I am so proud of her. She is an inspiration.”

For any question you may have, consultation appointment or more use the form below:
[contact-form-7 id=”5″]