This month’s Face of the Foundation, Jessica, is studying to be an electronneurodiagnostic technician at Midwestern Career 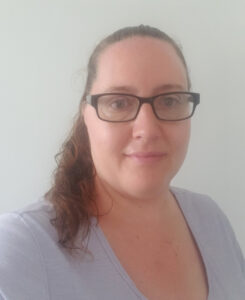 College, a partner of the Epilepsy Foundation of Greater Chicago. She is enrolled in their Electroneurodiagnostic (END) Technologist Program. END Technologists record the electrical activity of the brain, spinal cord, and peripheral nerves, including the EEG tests used in monitoring and diagnosing epilepsy. Here’s what she has to say:

I’ve had epilepsy since I was 10 years old. I’ve had a lot of EEGs done because I’ve had brain tumors and brain surgeries. My friend actually passed away last year from Huntington’s disease. So, I really got interested in knowing more about neurological conditions in the brain and stuff like that.

Describe your experience in the END Program.

I actually really enjoyed the program. We’re almost done with it now, but the instructors have been great and I’ve learned a lot from them. I find it really interesting on how I’ve learned other things about the program, such as strokes, and other kinds of illnesses that you can detect and help diagnose with this program.

Has the END program been able to help your personal journey?

I’ve learned a lot more. I’ve had a lot of knowledge due to the fact that I’ve had epilepsy since I was a child, but it helps me with learning about different things such as, the different locations in the brain, and the things that control your emotions, your memory, and all those kinds of things. I find it very interesting.

What advice would you share with future END students who are either thinking about this program, as well as future students who may be dealing with epilepsy?

I would say the number one thing is anything is possible. I’ve had three brain surgeries, I’ve had epilepsy since a child and since I’ve had my last surgery, I’ve only had two seizures since 2011. So, anything is possible. It’s a good recovery process but it may take time. And to students, it’s not just about epilepsy that you’ll be learning about. I found a lot of other very interesting things in the program such as, evoked-potentials, and how they detect different things like say MS, and other kinds of conditions such as your behavior.

What are your thoughts on MCC partnering with Epilepsy Foundation of Greater Chicago to expand awareness of epilepsy?

I’ve actually done different things with the Epilepsy of Greater Chicago, such as forums and 5Ks, and stuff like that. I think it really helps to bring a lot of knowledge at these forums  where they can have family members, caregivers and students there to learn more about the research that’s been going on, and continuous treatments, such as VNS devices and all those types of things that can help to control different symptoms.

I just want to say one thing. With all of the medical issues that I’ve had in the past, such as my epilepsy brain tumors and those types of things, I just really want to let people know whether it’s a family member or friends or themselves dealing with different neurological conditions, such as epilepsy or dementia, any type of those things – that they can really make it through this with proper treatment. It might take a little time, but it does really help with the proper treatments, and medical personnel, such as an Epileptologist. They can really make it through that. Like I said I’ve only had two seizures in nine years. I used to have them four to five times a day.

**To learn more about this program visit www.mccollege.edu