I was born in 1989 in Bogota Colombia. I was adopted at seven weeks of age and brought to the United States. I spent the first 13 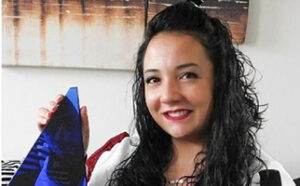 years of my life in New Jersey about an hour outside of New York City. Then my dad got transferred for work, and I spent the next 13 years 45 minutes north of Pittsburgh, PA. In 2008, I started working for Walgreens. After college in 2011, I was asked to be an assistant manager. In 2014, I decided that there wasn’t much room for growth with Walgreens in Pittsburgh, so I picked up my life and moved to Chicagoland. I eventually became a Store Manager, then moved up to corporate in Deerfield, and here we are.

My epilepsy journey began in 2002. I had my first seizure when I was 10 years old. I had the flu, a 101-degree fever, chills, the whole thing. I had awoken in the middle of the night to go to the bathroom. I had just finished washing my hands and had turned to walk out the door, and I remember stubbing my toe on the door and saying “ouch!”. The next thing I knew, I opened my eyes and I was outside, in the cold, looking at the stars. In my 10-year-old brain, I really wondered if I was in heaven. When you come out of a seizure you are incredibly disoriented. That can be tunnel hearing, blurred vision, feeling dazed etc. My neurologist once told me that having a seizure is comparable to running a full-blown marathon. As I started to come to, and my eyes focused, I could see the flashing blue and red lights, and I heard voices. A nice lady paramedic leaned over me and said “Oh honey, everything is okay. You had a seizure. Your mom and brother are here, and they are going to meet us at the hospital.” At this time, as I explained earlier, it was not diagnosed as epilepsy. It was the first time this had ever happened, and the doctors attributed it to my fever and flu.

Two years went by before I had my next seizure. I was 12. My grandfather had just died, and we were down in Florida for his memorial service. I remember it was the early morning hours in the hotel. It started with my heart racing. Then the entire right side of my body was paralyzed and was starting to shake. I felt myself panicking. Then everything went blank. I woke up in the hospital screaming and crying because I did not know where I was, and I was in pain. Pain like I had never felt in my LIFE. Everyone came running to my bedside, quickly telling me I was in the hospital and I had had another seizure. The searing pain I was feeling was the IV drip in my arm, that also included Dilantin. For those of you who may not be familiar, it is a popular hospital drug to help stop people having seizures. One major side effect is that when given intravenously, it can cause burning. And burn it did. It did so much damage in my arm, that my vein re-routed itself because the original vein was destroyed. The nurse slowed the drip, she tried everything to make it stop burning but nothing worked. I had to have the meds. It was one of those experiences you never forget. I still cringe thinking about it. As if it is not bad enough waking up not knowing where you are, not seeing your mom because your eyes are out of focus, but you also have a searing pain. When we got home from Florida, my mother got me a consultation with a neurologist, and they wanted to run batteries of tests to see what was going on. After many EEGs, MRIs, CAT scans, and even overnight stays in the hospital for CCTVEEGS, I was diagnosed with epilepsy.

One of the hardest things about my epilepsy is that every single test BUT the EEGs came back normal. I had no tumors, no cysts, no malformations. There was no disruption in the brain cavity, brain stem, nothing. We were all relieved, but at the same time still yearning for answers because, WHAT WAS CAUSING THE EPILEPSY?! The EEGs did show abnormal activity in the left hemisphere of my brain. But there was no physical reason that this was happening. Even to this day, I have no definitive diagnosis for my epilepsy. They THINK it is chemically/hormonally related, but they are not sure.

Throughout my childhood, young adulthood, and even adulthood I have had various restrictions and have faced discrimination because of my epilepsy. People see a seizure and think that is where it ends. Nope. That is JUST the tip of the iceberg. After my second seizure, my neurologist put me on a LIST of restrictions as they attempted to diagnose the cause of my seizures. There were no sleepovers, because I had to ensure a consistent sleep pattern and get at least 8 hours of sleep a night…there was no rollercoasters at theme parks or “spinny” rides at carnivals…there was no swimming in the very beginning because they didn’t want to risk me drowning while having a seizure…there was no plays, events, or movies with flashing/strobe lights as those can be triggers for seizures…so many restrictions. As a kid, it was devastating to be “different”. Later, as I turned 15 or 16 I had a seizure months before I was supposed to get my permit. In Pennsylvania, you must be seizure free for 6 months seizure free before you can get your permit. I did not get to obtain my permit like all my friends at 16. I was so disappointed and hurt, I did not get my license until right before college. As I moved into adulthood, I had restrictions at work. I was sure to get a letter every year from my neurologist for my bosses to make it black and white for them of the accommodations I needed. For those of you who worked in the retail, you know that once you become a manager, you have a whole host of tasks that regular team members do not do. I had restrictions due to my epilepsy that prevented me from doing a few of those tasks. There was no climbing tall ladders for a long time to do another seizure I had in my early twenties. That one was only a temporary restriction. There was no back to back closing shift to opening shift for me unless it was absolutely necessary. If I did do that shift, I had to have a couple days off after to re-regulate my sleep. Another restriction that never changed for me was that I absolutely could not do overnight shifts.

This is where I encountered discrimination for the first time. There was a situation where my store manager (who absolutely does NOT work for the company anymore) told me I would never ever be a store manager because I could not do overnights. I remember standing there in shock like. What? Here I was 21 years old, working my tail off, only for this guy to tell me it was all for nothing? I asked his superior the next day about what the store manager said to me, and he did not say it was true, but he also did not say it untrue. He gave me some political answer and moved on. Luckily, I am not one to let haters get me down. Ever. In fact, I prefer to turn statements like that into fuel. So, I did. I kept going, I kept working hard…I moved to Chicago in 2014, BECAME A STORE MANAGER in this cutthroat retail area…and the moved on to corporate. I relish quietly that I proved them all wrong.

In all, throughout my life I have had probably 7 or 8 tonic clonic seizures, and many more focal onset seizures. It is something that is not going away. It has taken me a long time to speak out, but my advocacy work has become my platform, my way to help others with this disease. Since I began this work, I have had people directly affected by epilepsy reach out for my help. I have been able to guide them through their journey navigating conversations with their bosses and finding their voices. I did not have that person to help me. I honestly did not even know those kinds of resources were available to me. If I can help just ONE person, this work is 100% worth it and rewarding to me because epilepsy can be lonely, and it is can be a terrifying journey at times. But it becomes a little less scary when you have a network and tribe of people who live this life with you. That is why I stand on my soapbox, preach, and fight daily for people to care about epilepsy, and care about the warriors and their caregivers, and what the every day person can do to be a hero for someone with epilepsy.