“…Roll with the punches a little bit, get back up, keep fighting, just knowing that there are so many other people out there, going through that same experience.” 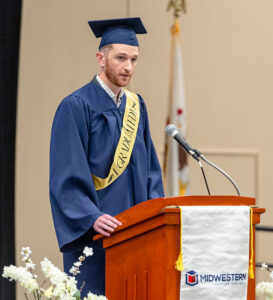 ready to share his journey with us with the hopes of helping others. Ten years ago, at the age of 21, Brendan was diagnosed with epilepsy. Still early into his life and professional career, he had barely begun to scratch the surface of his potential. Little did he know, his diagnosis would eventually lead him to his future career of becoming a Neurodiagnostic Technologist. Now at 32 years old, Brendan is a graduate from MCC’s Electroneurodiagnostic (END) Technology Program.

Back In 2011, Brendan experienced his first seizure. Before his diagnosis, Brendan stayed relatively healthy for most of his life, so it was a shock for not only Brendan but also his family and friends. Seizures can happen for numerous reasons; doctors are still unclear as to why it happened to Brendan.

Brendan grew up in Arlington Heights and later moved to Chicago in his early twenties. He was used to living by himself, but now faced with the reality of living with epilepsy, Brendan had to temporarily lose his independence.

“You know, kind of the rug pulled out from you in a way, when you start having seizures. The first thing that goes is the driver’s license. Then you’ve got people who care about you, kind of always checking in on you and making sure you know where you are. They don’t want you to be out and about just having seizures. So all of a sudden, you feel like, I’ve kind of lost this little bit of autonomy and independence in a way.”

Physically, the seizures began taking a toll on Brendan’s overall health. There were many times when Brendan would wake up suddenly on the floor after knocking his head on the counter. He describes these seizures as a “lights go out” experience.

“…You wake up, and you have no idea what just happened and where you are. A lot of times you’re just in a total state of confusion.”

There was one particular instance Brendan recalls as a life-saving moment while in the Epilepsy Monitoring Unit at UIC.

“And so I was hooked up to EEG, EKG, all that, and sure enough, my heart stopped, my heart rate stopped for 24 seconds. So I got to witness it on video. I’ve got to watch myself have a seizure. Kind of slumped over, my heart stops, and all the nurses rush in.

So I’m just kind of watching this in retrospect, thinking like, ‘Oh my God.’ That was kind of it. Luckily, it happened in the setting that it did, but we then found out that a lot of the seizures I was having, my heart was truly stopping. So that really, kind of struck me in a way of like, hey, really at any given time because I don’t necessarily know when these events are going to take place. And you can just kind of fall down, and that really could be it. So it put a lot into perspective for me of just kind of the preciousness of this whole thing we got going here on Earth, and in a good way, in a very positive way. So it’s changed my outlook in that regard.”

Things seem to be looking up from 2014 to 2017, as Brendan went through a seizure-free period, unfortunately, it didn’t last long. The seizures came back, and this time more painful than ever. Still, Brendan had a glimmer of hope that things would be okay. He remembered what it felt like to be healthy and used it as motivation. It’s a testament to Brendan’s unwavering optimism. With a new focus, Brendan set out to explore his options to eradicate the seizures, if at all possible.

Ten years into his diagnosis, Brendan started considering the option of surgery. After discussing it with his family, he knew it was time to take the next step. In the Summer of last year, Brendan underwent an hippocampectomy (a temporal lobe operation) to remove his right hemisphere’s hippocampus. His doctors had discovered scarring on the actual tissue, which could have caused the seizures. Ultimately, the doctors decided to remove the whole thing. His surgeon, Dr. Loeb, the Neurologist at UIC, and the UIC medical team were instrumental in Brendan’s surgery and recovery, providing excellent care to this day.

But, while the surgery was quick, the recovery was tough. Post-surgery, Brendan encountered severe headaches, unlike any headaches he had in the past. Thankfully, his support system was there every step of the way. Brendan credits his immediate family, both of his parents and three siblings for helping him get through the tough times. His close friends were also there, always offering to give him rides since Brendan was unable to drive at the time.

During the recovery period, while on medical leave from his job, Brendan had the space and time he needed to think about where his career and life were headed. One day, Brendan was online reading an epilepsy forum when he came across a post that immediately resonated with him. The commenter posed a question to those living with epilepsy, “Why not think about becoming an EEG Technician?”

“And that really kind of resonated with me, because I was at the time looking for a career change and didn’t quite know what I wanted to be going into. So that little post alone just kind of flipped a little switch in my head, and then straight from there started researching different EEG and END programs and came across Midwestern because I’m from Chicago and live in the area.”

After making a full recovery and enrolling in MCC’s END program, Brendan is looking ahead – living and enjoying every moment. He recently got back into rock climbing, which he had to put on hiatus before his surgery. And, around this time, Brendan earnestly wanted to get involved in the epilepsy community and met with a family friend who recommended that he look into the Epilepsy Foundation of Greater Chicago (EFGC). Brendan reached out to the foundation and has since joined EFGC’s Associate Board.

“So I’ve gotten some great experience and met a lot of people through that. Putting on events and fundraisers all over the city to spread awareness, raise money for the cause. And yeah, that’s, that’s been really good so far. Really, kind of what I was looking for from this whole experience. First getting into EEG and END and then joining the committee with the Epilepsy Foundation. Yeah, it’s been it’s been awesome.”

The 32-year-old future EEG Tech is now finishing up his clinical rotation at Northwestern Hospital. When reflecting on how his epilepsy diagnosis has changed his life, he revealed how important it is to keep things in perspective.

“It could be people a lot better off than you, a lot worse off than you. And I just tried to not let it control my life even though there are certainly times when it does, and I don’t have much of a choice about it. But just kind of roll with the punches a little bit, get back up, keep fighting, just knowing that there are so many other people out there going through that same experience. Not to take away, everyone’s in a unique scenario for sure. But, you know, there’s definitely hope, I would say.”