These last couple months have been quite a whirlwind for Mason, a senior at Niles North High School. In 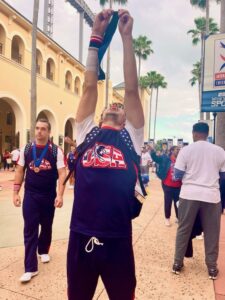 February he qualified for the USA Junior National Coed Cheer Team. They did not have much time to prepare for the 2022 International Cheer Union’s World Cheerleading Championship, but that did not stop them from bringing home the gold medal on April 20th, quite an amazing accomplishment. More on that in a little bit.

“I am bold,” Mason says. “I will always give it my all and be my genuine self. One hundred percent.”

Anyone who knows Mason, knows that this is true, but this wasn’t always the case. He has had his struggles, including being bullied as a young child. Mason has epilepsy. He was diagnosed in first grade after he had a seizure.

“My mom had a gut feeling that something wasn’t right… We went to the doctor and they confirmed it,” he says.

Having epilepsy has been a “learning process with ups and downs.” Early on, school was difficult. Other students did not understand what epilepsy was.

“I felt like I was being targeted and I was treated like I wasn’t normal,” he says.

In 2016 Mason attended Camp Blackhawk, EFGC’s week-long retreat for kids and teens with epilepsy. As an 11-year-old, this experience seemed daunting at first. He was nervous and felt homesick. Things quickly changed, however. He formed a close bond with other campers, who he is still friends with today.

“It was an amazing feeling to be around others who were just like me,” Mason recalls. “If you are a kid with epilepsy who feels alone, this is the place to go.”

One of Mason’s favorite memories of Camp Blackhawk was his performance with his tight-knit group of friends at the talent show. They dressed up and lip-synced a Meghan Trainer song.

“It was the best. We were out there having so much fun. Nothing else mattered.”

Mason and his friends would stay up late swapping stories about how epilepsy has impacted their lives, including being picked on for having the disorder. These nights are memories that Mason will never forget. He attended Camp Blackhawk for four years and feels that it helped him gain the perspective that there’s “nothing wrong” with him.

In high school, Mason developed an interest in cheerleading from watching his brother’s experiences on the cheerleading team. His experience at Camp Blackhawk gave him the confidence to take on this challenge.

“I knew I wanted to be on that mat,” he recalls.

Mason became a member of the Niles North cheerleading squad.

“I love it and wouldn’t trade it for anything. The bond I have with all of my teammates is incredible. Every person has a special place in my heart and every moment is memory making.”

Mason’s passion for cheerleading has clearly helped him succeed. He was recruited by Roosevelt University to be on their cheerleading team beginning in the 2022-2023 academic school year. He excitedly anticipates the start of his freshman year there this fall and competing in the National Cheerleaders Association Collegiate Championship in Daytona next year.

While Mason’s seizures have become more controlled, he is still hoping to one day be completely seizure free. His triggers have lessened over time and he has just one to contend with now: stress.

This cannot be easy for someone who is competing.  From big crowds to bad practices, cheerleading can be very overwhelming. However, Mason has worked hard to manage his stress. Taking a step back to do deep breaths, as well as focusing on something he is passionate about, have been very helpful techniques.

“I think that having the ability to control my stress is huge. A big part of it is accepting who you are. In the last five years I have become OK with having epilepsy. I just live day by day. It’s a challenge to embrace. Nobody’s perfect.”

Mason can now look back on the times that he wished he “was normal.” It is interesting to reflect on what that means. Mason is not “normal.” He just finished competing in a global championship. After spending every weekend practicing with his fellow teammates of the USA Junior National Coed Cheer Team for two months, they competed at the ESPN Arena Center in Orlando and won the gold. That is not something many can say they have accomplished. Mason’s challenges and ultimate successes have turned him into the person he is today and he has some advice:

“To any kid with epilepsy… don’t be afraid. Embrace it and be yourself. Don’t let others challenge who you are. Your condition doesn’t have to stop you from pushing to meet your dreams.”