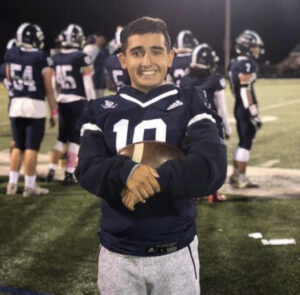 Hi, my name is Rose Ayala, I am Anthony Ruffino’s mom and this is his heroic story.

Anthony Ruffino was born April 6, 2003. Anthony had a normal birth weighing in at 6lbs 9 oz with no complications and no concerns. Anthony is the youngest of 4. His siblings Johnny, Stephanie, and Alexa have never had anything wrong other than childhood viruses, no hospitalizations, no significant medical diagnoses. When Anthony was about 3 months old, I happened to catch some odd body “folding” activity on my flip phone and brought it to his primary care doctor to see. He had no idea what this was but he suggested we get admitted to Rush under GI. His primary care doctor thought it was reflux/GERD. After a week in the hospital and many inconclusive test results, we were going home…and then it happened again. His heart rate went up on monitor and his little body folded over with such force. His nurse called the floor doctor and GI turned it over to neurology… now more tests.

Finally, Anthony’s diagnosis came: infantile spasms, aka West Syndrome, “one of the hardest, most damaging kinds of seizures”. They would come in clusters – up to 50 a day, consisting of 120+ pulls a day. All he did was seize, cry, sleep, eat, spit up and repeat. The prognosis was poor, very poor. “He will never be able to walk, to talk, to jump, his brain will be mush. He will be in a wheelchair and most likely in a living facility.” That was what we were told by the neurologist at Rush. He was discharged and we were sent home with anti-seizure medications, including intramuscular injections (ACTH) and an emergency protocol for seizures.

My anxiety was high, I began to call many epilepsy centers asking many questions. I wrote every contact down in a spiral notebook. After many calls I finally got one clinic in Florida, the Dan Marino Epilepsy Center to suggest the Mayo Clinic in Rochester, MN. We got an appointment ASAP and went to Rochester. After an EEG and video monitoring at the Mayo Clinic it was confirmed again, infantile spasms. The longer we waited to stop them, the more damage his brain would receive. The Mayo Clinic asked if we lived close to Chicago because the doctor we needed was Dr. Nordli at Children’s Memorial (now Robert H Lurie) to help with a ketogenic diet for Anthony. After many calls to Dr. Nordli’s office and begging for an appointment (Dr. Nordli was not taking new patients at the time), we got an appointment to meet and start treatment with Dr. Nordli.

The problem we faced was getting a case of the K-Cal (it was not FDA approved in the United States). Also, neither a dieticiannor nurse to help were not available yet, as this diet was new to Children’s Memorial Hospital at the time. The diet was so new that not many people knew how it worked.

I did NOT stop. I told Dr. Nordli to give me a book and I would help him troubleshoot the diet. I asked Dr. Nordli to help me help him and he DID. After many obstacles, many tears, many hospitalizations and ambulance transports, six months later he was seizure free on the diet! The most damaging forms of seizures were resolved. It was not easy, I recall at one point, I almost gave up but I did NOT. Parents please advocate for your child, we are their voice, their hope, their crutch and we stand by them no matter what. NEVER GIVE UP!

Now the journey to rehab Anthony began. It consisted of five days a week speech, occupational and physical therapies. Never giving up hope. His therapists at Easter Seals were amazing! The therapies worked and changed his life. Anthony said his first words when he was four years old. He said, “hi Mom”. I cried. Anthony’s muscle tone was very weak at first, due to the infantile spasms. Through countless physical therapies and at-home continued exercises guided by his therapist, he was able to start walking and running at age two. He ran fast! Anthony was seizure free for about four years.

On February 3, 2008, Anthony had a grand mal seizure and that day began his second journey. Anthony had two events, one at age five and the other at age seven. He was at home both times. These two seizures were bad. He stopped breathing. I had to administer CPR. I was able to remain calm and do what I did day in and day out. Working at a major emergency pediatric department at the time, in nursing, definitely helped. Never in a million years did I think I would be administering life-saving rescue breaths to my child.

Today, we continue to walk this journey. Anthony has a diagnosis of intractable seizures with cognitive impairment both focal and generalized features. We have a great team at Ann & Robert H Lurie’s Hospital. Dr. Garcia-Sosa, a pediatric epileptologist, is amazing. She has stepped in and continues to troubleshoot and advocate for Anthony. Her bedside manner is outstanding, taking care of his condition and always approaching Anthony with great care and empathy.

Anthony’s treatments have included the ketogenic diet, speech, occupational, physical, equestrian therapies, DNA study (some abnormalities may be in DNA and some may have a cure, unfortunately Anthony’s is not), VNS (vagal nerve stimulator), Epidiolex (FDA approved medical cannabis) and many other medications… so many I would need more time and pages.

I cannot forget to mention his pediatric psychiatrist Dr. Agnes Costello out of Northwestern Central DuPage Hospital. Dr. Costello has been our rock and also advocates for our son. Anthony has a clinical diagnosis of autism, obsessive compulsive behavior, anxiety and apraxia. Some of these diagnoses walk hand-in-hand with epilepsy. I also want to mention how wonderful it has been to have the Epilepsy Foundation of Greater Chicago as a resource. When my door would close and procedures were not approved by my insurance, the EFGC stepped in to help. When his team at his school did not know how to use the VNS magnet, the EFGC sent a representative to teach/train the staff at his school and the bus driver on how to use the magnet.

Anthony strives in so many ways. He is an excellent swimmer, he can nail a butterfly stroke! He was part of a private swim club and never gave up, impressing me with every stroke he took. He loves music, golf, bowling, tennis, and loves to sing, dance, cook and paint. He has participated in the Special Olympics and took the bronze his sophomore year in shot put. Anthony wishes to play football. Last October 2021, before he underwent surgery to replace a battery to his vagal nerve stimulator device, his high school varsity football team honored him as a hero. They gave him a chance to walk in with the team and toss the ball around with them at their last home football game. The senior boys walked in with him arm in arm as the high school marching band played their school song. The crowd cheered. The team recognized his heroic journey by giving him his own football jersey #18 for his 18 years of life. He was beyond himself and well you can imagine my heart was drowning with happiness and tears were hard to hold back. What an amazing team Lake Park High School will always be in our hearts. As Lake Park High School says, “Lancers for Life”.

Anthony also loves to travel, one of his favorite spots we visited was Costa Rica where we hiked to the skirts of the Arenal Volcano. He loves nature and the simplest of things thrills him. He is simple, so simple. For Christmas this year all he wanted was socks and sleeping pants. Anthony continues to fight epilepsy like a true hero every day. We do not take anything for granted. We count our blessings and give back as much as we can.

Thank you to all who support our epilepsy heroes. Currently one of my coworkers and awesome athletic trainers at the high school where I work, Mr. Zac Roberts will be running in the Chicago Marathon for the Epilepsy Foundation in October 2022, raising money for a cure. He is inspired by Anthony’s story and the many who fight epilepsy.

When you have a medically dented child, you learn, you advocate, you break down, but get up and shake it off. You become their voice, their support system, you hug them tight, you embrace them, you celebrate every obstacle they overcome, you pray with them and for them. Please trust your gut… when something feels wrong, it is. Finally, remember our heroes were given to us for a reason, they come with a message. We may never get to know, in this lifetime, why we were chosen but I leave you with this in mind:

Keep advocating and keep believing one day we will have a cure.

For any question you may have, consultation appointment or more use the form below:
[contact-form-7 id=”5″]