Tony has faced serious challenges in his life, but that does not stop him from looking on the brighter side of  things. In fact, he lives by a simple motto: the glass is always half full. 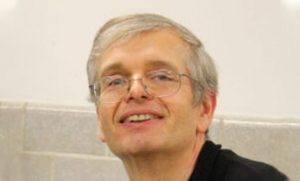 “There are good things in the world,” says Tony. “Enjoy the moment because every day is a gift.”

In the late 1980s Tony was working a complex job for a major corporation. He was two classes away from receiving his graduate degree in project management for computer systems when he had to undergo emergency surgery due to a sinus infection that reached his brain. Due to the infection, he began having seizures. After some time off he became seizure free, finished his degree and returned to work. This is just the beginning of Tony’s story, however. He would later suffer from a brain hemorrhage, which caused his seizures to return and left him unable to work.

“My mind wasn’t the same,” Tony recalls, “and I needed help.”

Tony found the Epilepsy Foundation of Greater Chicago over a decade ago and was immediately taken aback by the support he received.

“I’ve always liked to get things done and have everything in order,” Tony says. “I want all my ‘t’s crossed and ‘i’s dotted. The staff at EFGC were great with that and continue to be.”

Tony’s case manager gave him vocational assistance and helped him apply for and receive Social Security Disability Insurance (SSDI). He also found a new sense of belonging at the Foundation. He attended support groups, participated in advocacy work, and volunteered, which he continues to do so to this day. He was able to see that there are other people with epilepsy who face similar challenges to his and felt relieved and grateful.

“Before I connected with the Foundation, I didn’t know that other people go through what I go through. I’ve learned so much here and am much more aware of my opportunities.”

Tony has also learned a lot about himself. He knows that stress can trigger his seizures and does his best to keep focused on the task at hand. Recently Tony participated in the Foundation’s newly launched Psychotherapy Program, which gave him new insight into the importance of “mindfulness.”

“Having a positive mental attitude is key,” Tony says. “You have to be in control of yourself. You are the one who creates your future.”

The Psychotherapy Program has helped Tony understand how to gain a sense of accomplishment by “focusing on what matters.” He realizes his limitations, such as memory loss, but has found ways to navigate through certain challenges.

“The Psychotherapy Program has helped motivate me to pay attention ‘in the moment’. I can be forgetful, so I just have to try to get everything down on paper and not worry about remembering everything. I’m now in a routine of not pushing myself too hard. You have to appreciate the little things and take credit for your success. EFGC has helped me do just that.”